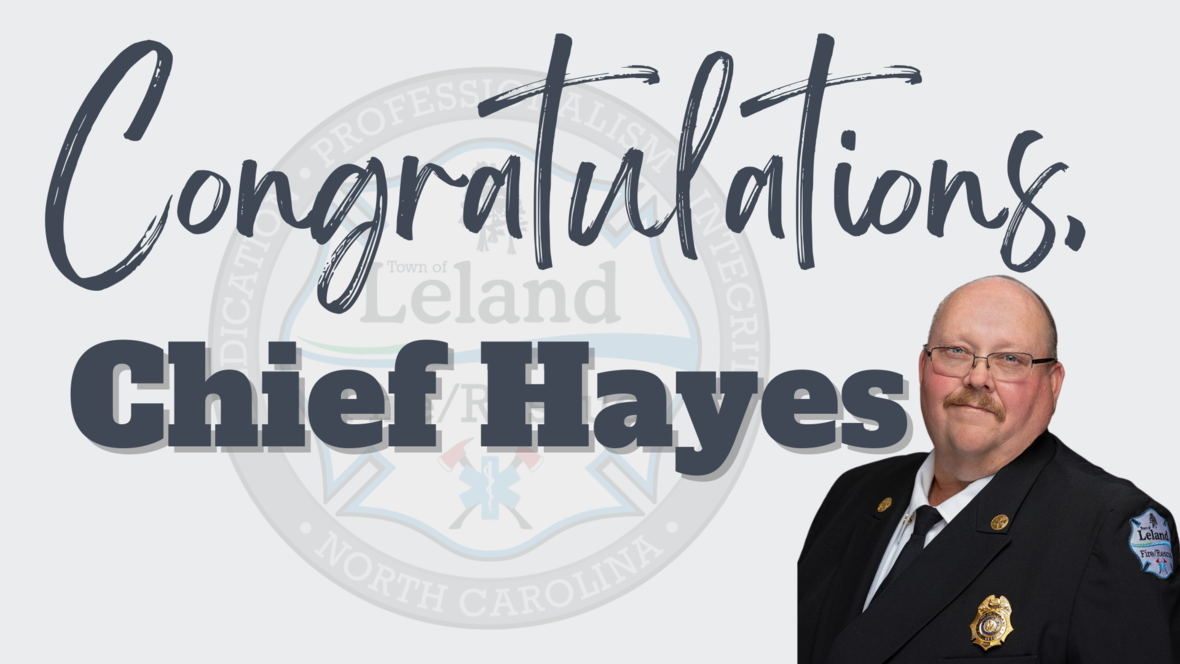 The Town of Leland is pleased to announce that Ronnie Hayes has been promoted to Fire Chief. Hayes joined Leland Fire/Rescue in 2007, serving as Captain, Assistant Chief of Operations, and most recently, Deputy Chief of Fire and Emergency Services. Since the department merged with the Town in 2017, Hayes has also served as the Town’s Fire Marshal.

“Over the past 15 years, I have seen the growth of the Town, community, and fire department, so I am excited about what is to come and the opportunity to continue serving Leland and northern Brunswick County,” Hayes said.

Hayes fills the position left vacant by Chris Langlois, who was named the Town’s first Public Safety Director in January.

“Since my arrival in August 2020, Chief Hayes has been invaluable, oftentimes behind the scenes, in helping the department achieve many of our most important projects, programs, goals, and objectives,” Langlois said.

“Chief Hayes’ many years with our department, his experience in emergency services, his qualifications and institutional knowledge, and most of all his love and passion for our organization make him the right choice to lead us on our continued journey to chase excellence and reach our vision,” Langlois said.

“We have an excellent group of employees in the department and the Town, and I look forward to working with them as we continue striving to provide the best public safety in North Carolina,” Hayes said.

Among other professional accomplishments, Hayes serves as an adjunct Fire, EMS, and FEMA instructor who works with local community colleges, has numerous fire and EMS certifications, and will obtain a B.S. in Disaster Management from Western Carolina University in December 2022. Hayes currently serves on the Board of Directors of the Eastern Carolina Firefighters Association and has previously served on the North Carolina Fallen Firefighters Foundation Board of Directors. A Columbus County native, Hayes has been married for 26 years and has two sons and a granddaughter.